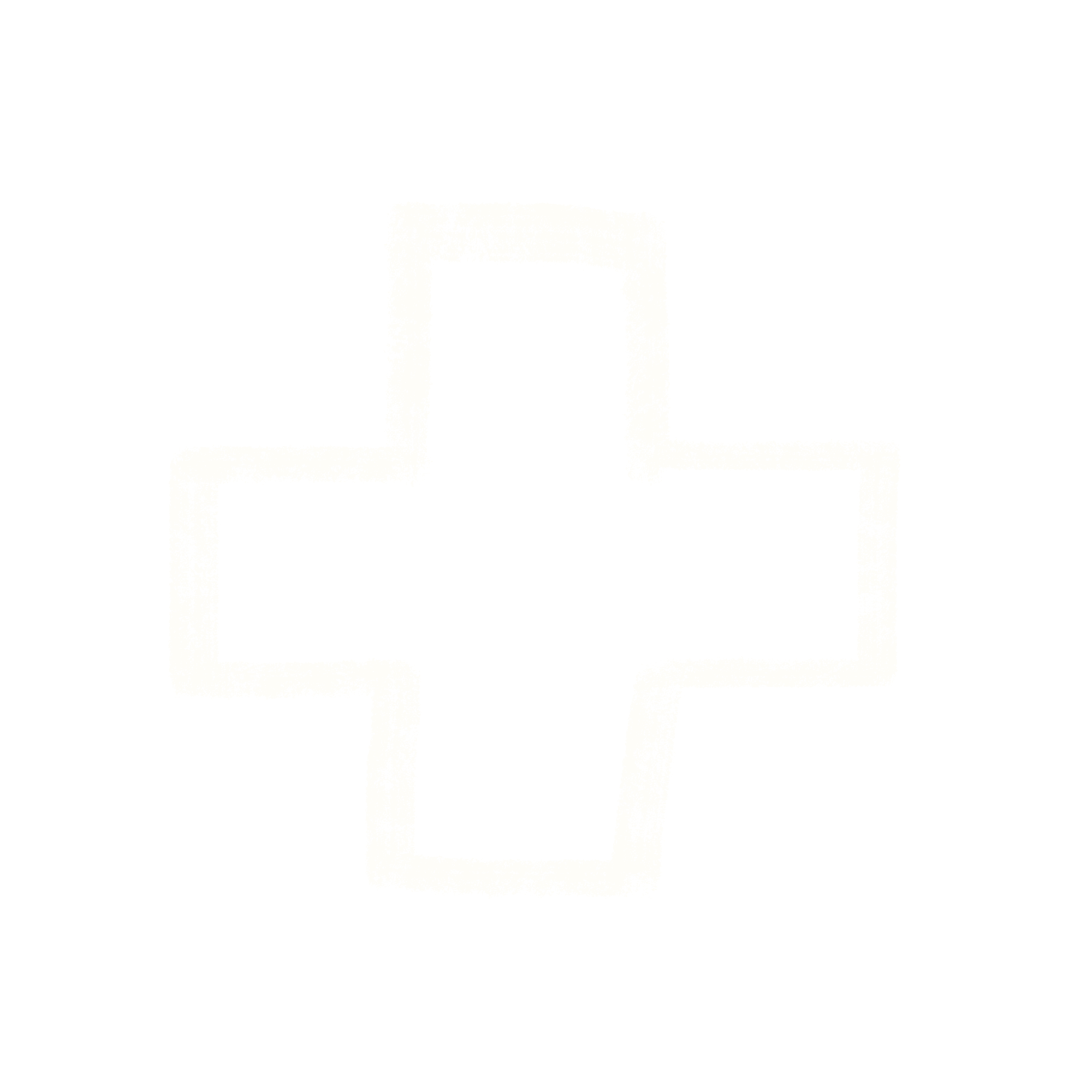 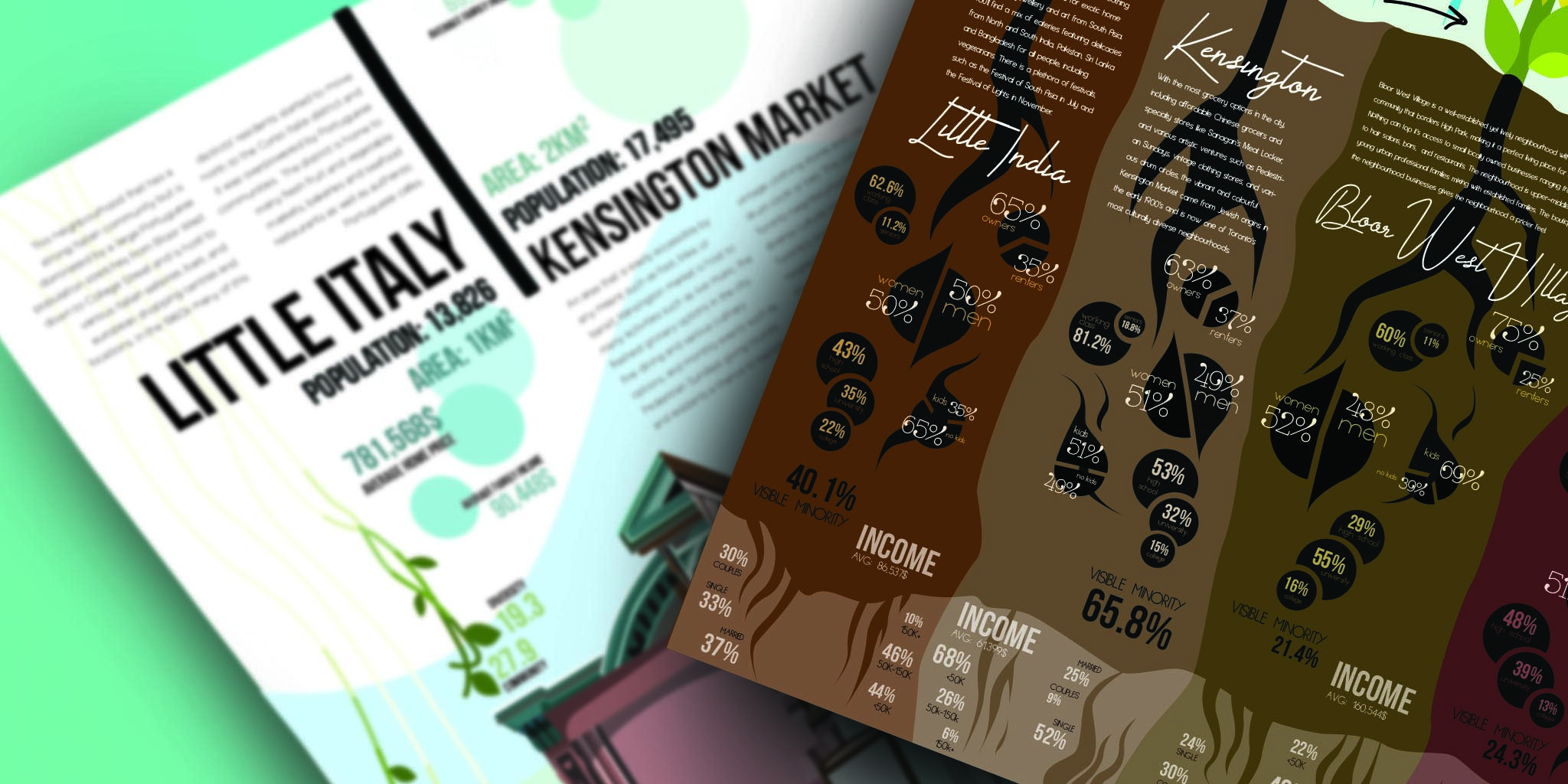 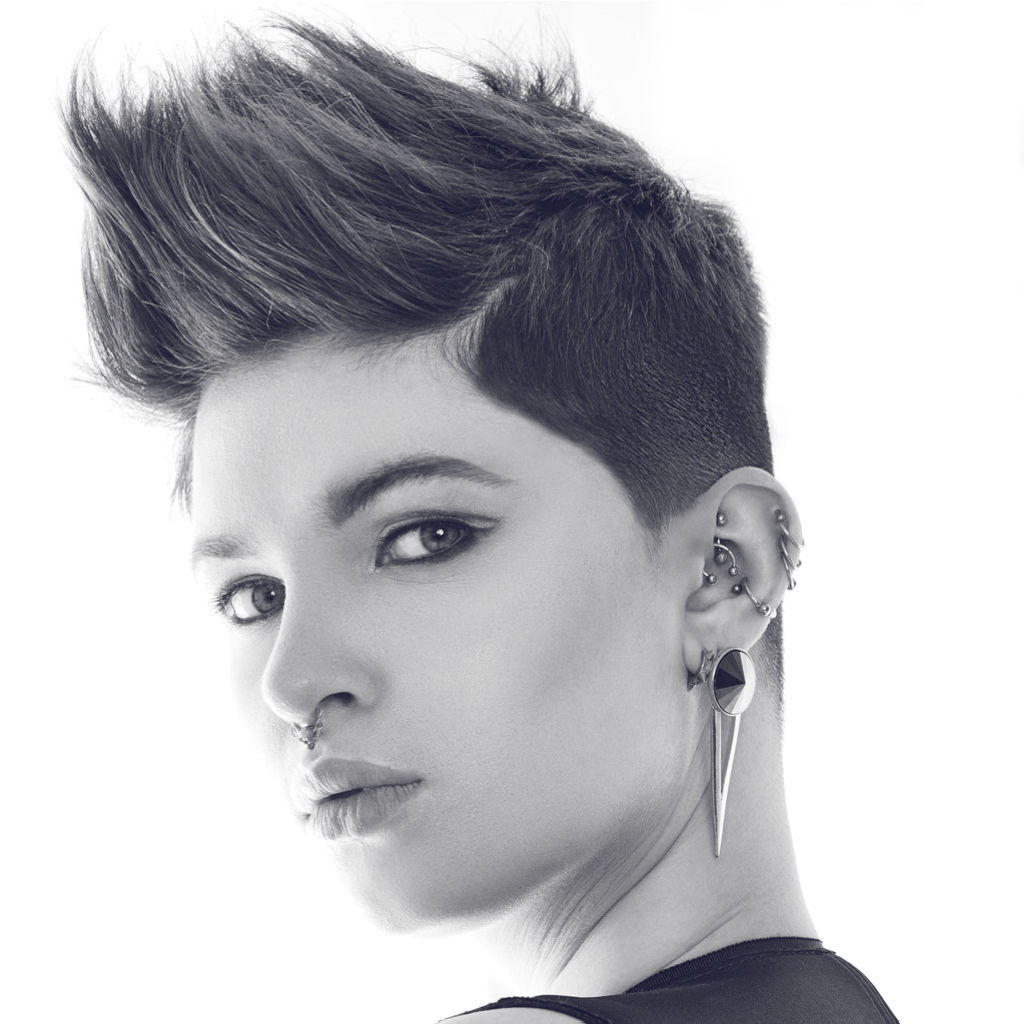 Designer(s)
Julia Paliy
Duration
13 Weeks
Recognitions
Blossoming Toronto Series
This project was actualized as two projects placed as a diptych series under the instruction of Gary Leroux for a second year YSDN Information Design course. With the takeaway subject of research being a comparative analysis of various geography based statistics between various neighbourhoods/districts in downtown Toronto, this series brings to light some of the concerns or issues that are posed on topics such as education level, poverty, income, and population within these researched areas. The districts chosen stem from the student's own personal experience living in those areas. Throughout her 4 years as a YSDN student, inhabiting and located within the crossover area of Kensington Market, Little Italy, and the Annex, and often visiting Little India (with a sibling habituated there) and Bloor West Village (representing Toronto's Ukrainian village, which is the birth place of the student) these areas posed as a great point of interest for analysis. 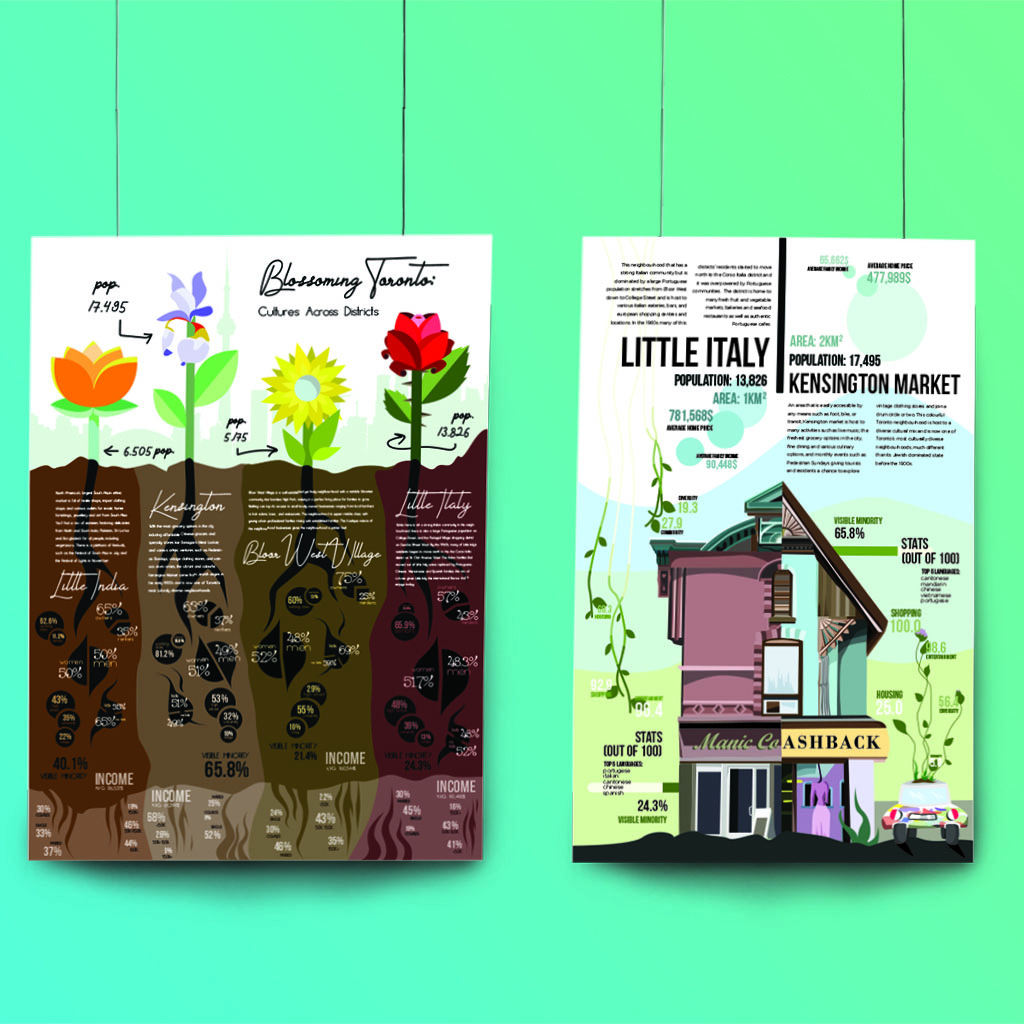 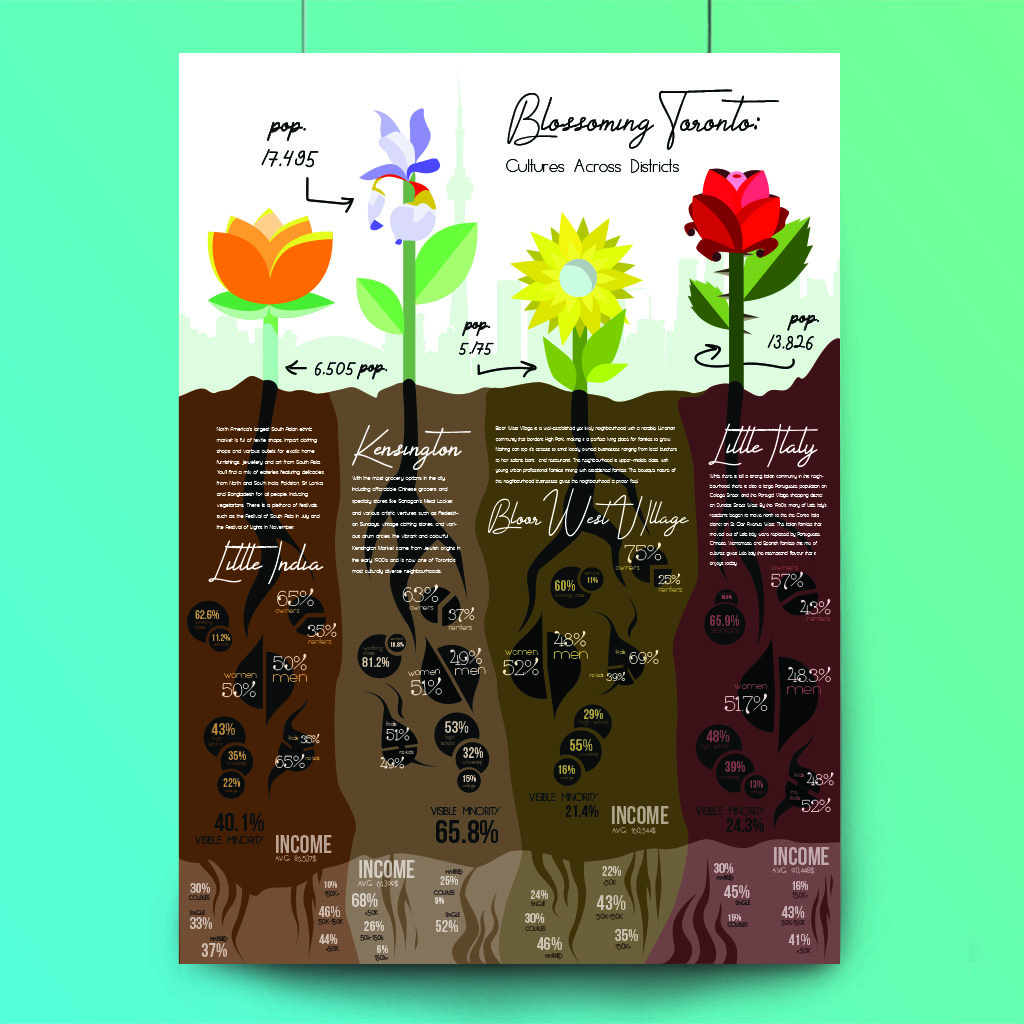 Blossoming Toronto: Cultures Across Districts
Titled Blossoming Toronto: Cultures Across Districts, this infographic poster outlines the key differences in statistics between four downtown Toronto districts of Bloor West Village (to represent the student's birth place, Ukraine), Little India (chosen to introduce diversity in cultures as well as east versus west Toronto, to avoid working from a eurocentric perspective), Kensington Market, and Little Italy (both areas where the student lives and were therefore great points of interest). The imagery and graphics of this piece aim to ilicit a sense of light atmosphere/elegant illustration. The project highlights on the urban scene of downtown Toronto with the skyline in the background, but really strives to focus on the earthliness through the use of floral illustration and placing all infographic content in the soil on this particular poster. More an art piece than a data visualization graph, this work allows the user to experience statistics and information design in an illustrative context to highlight the student's background in the visual and fine arts practice.
Little Italy vs Kensington Market
This second part of the diptych, which is a more specific and less broad analysis of two downtown Toronto districts, analyzes the neighbourhoods of Kensingon Market and Little Italy in a comparative fashion. The districts, chosen because of relatability on part of the student as places of habitation, are portrayed through the use of illustrations that both strongly relate to key features and tourism points. The focus point is a classic house/business building that are a common infrastructure in both areas: Manic Coffee for Little Italy, and a thrift shop named Flashback for Kensington Market. The ins/outs and details of both structures were illustrated in detail to capitalize on the aesthetics of both neighbourhoods. Infographic content is displayed in both cases through vines coming from compared structures, using Kensington's infamous Garden Car. This use of illustration to display data is very effective as it guides the user's eye through the piece based on recognizable visual elements. 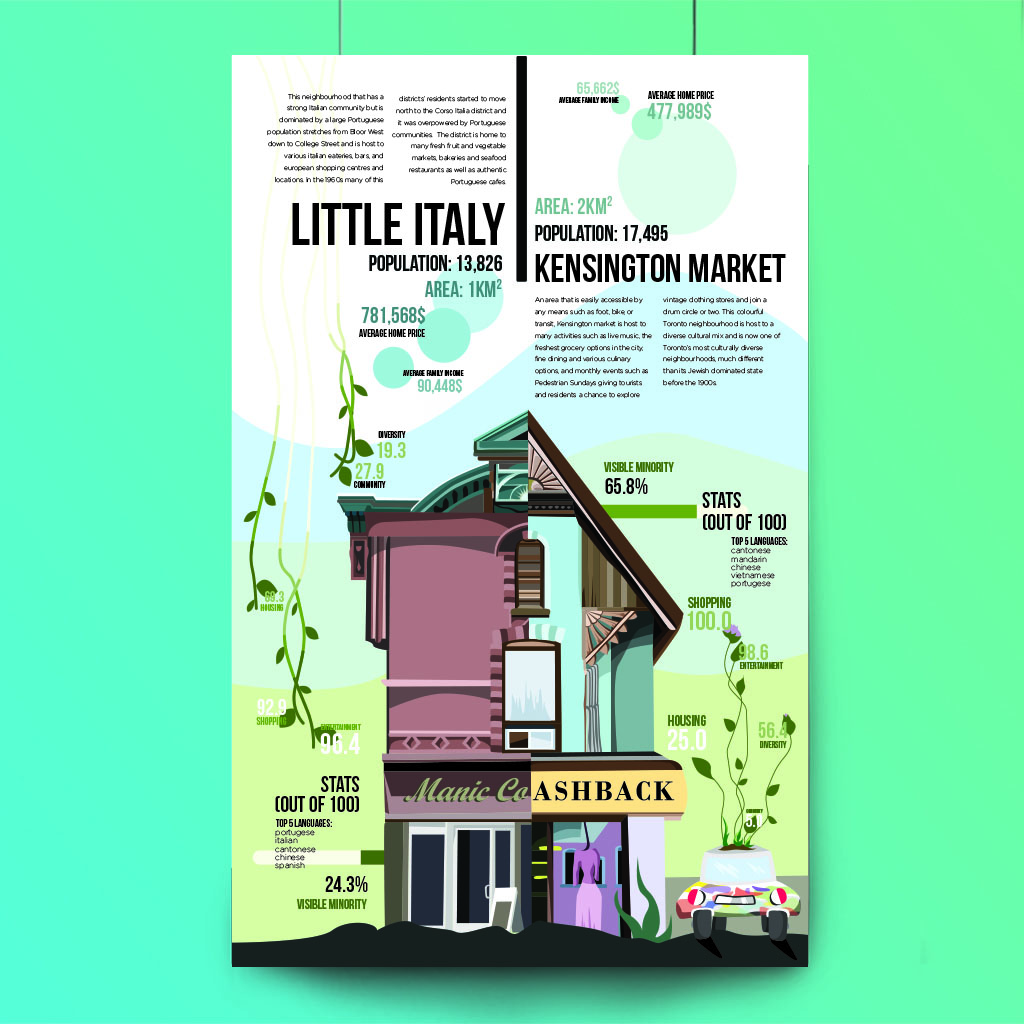 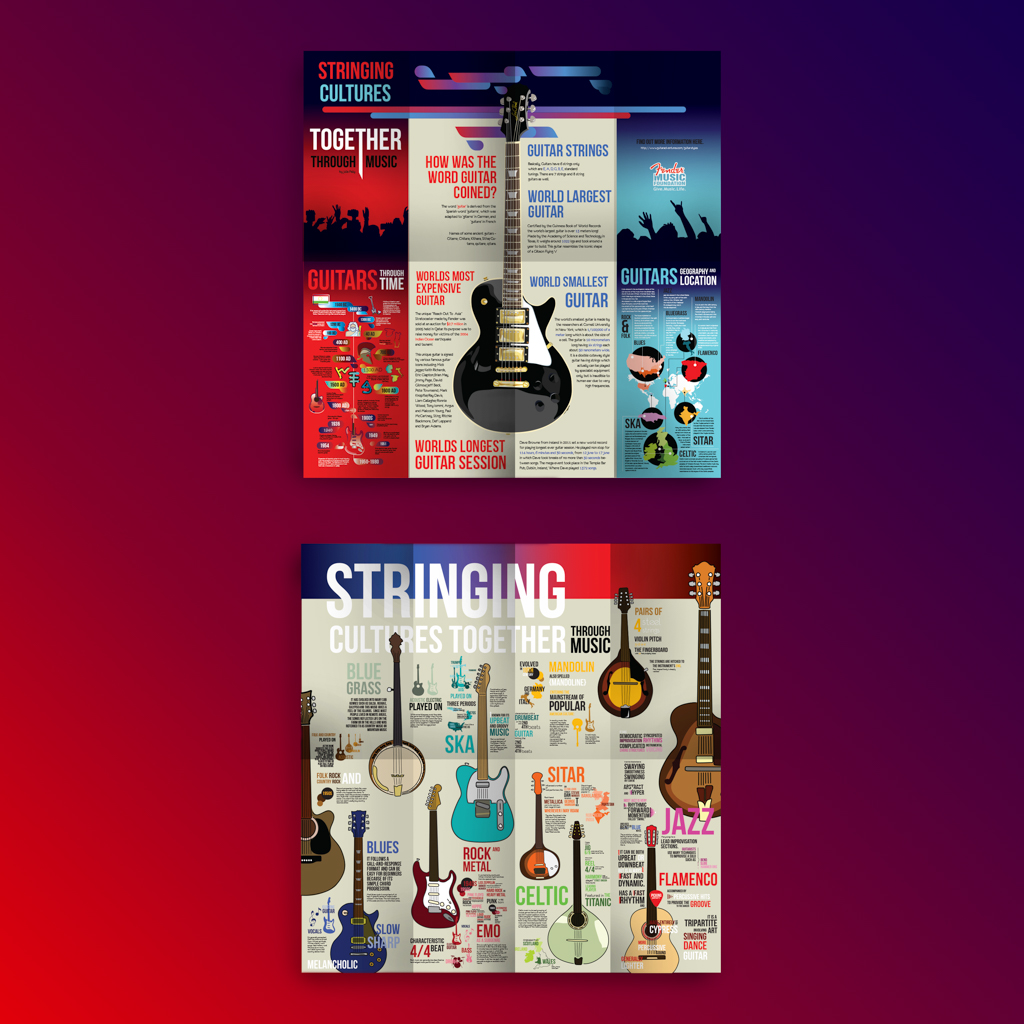 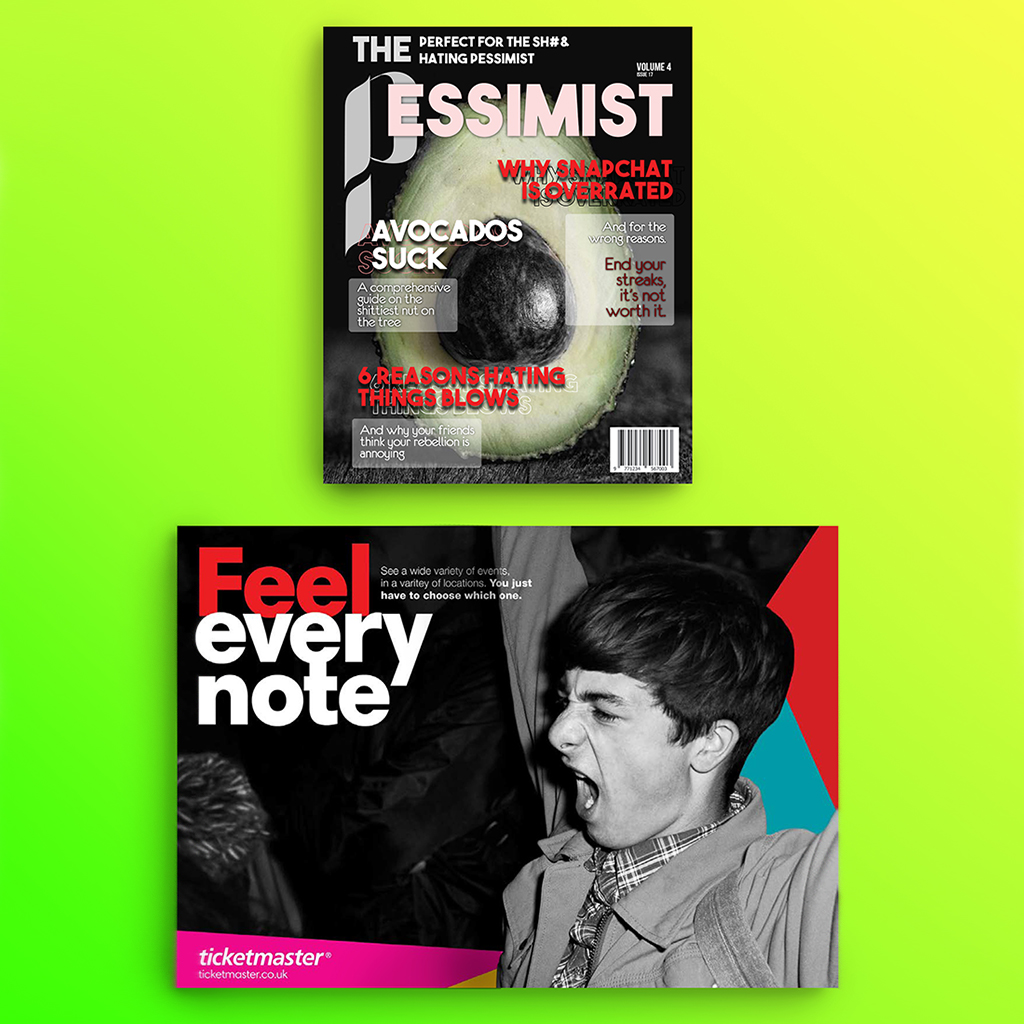 The Pessimist Magazine
Special Thanks to...